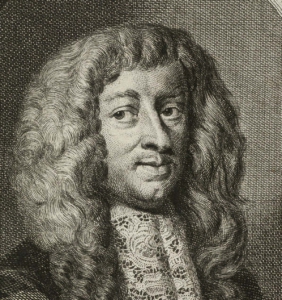 Built in 1672, architecture by Adriaen Dortsman

Coenraad van Beuningen (1622-1693), was diplomat, six times Lord Mayor of Amsterdam.
In his heyday he was a board member of the United East India Company (VOC), ambassador to the Republic in Stockholm, Sweden and also in Paris, France. He also had a brilliant role as a wartime crisis manager under Stadholder Willem III during the disaster year of 1672, when this nation was simultaneously attacked by the French, the English and the German troops led by the bishop van Münster.

Life went bad when in 1688 he lost his family fortune speculating with stock in United East India Company. He went manic-depressive, stark raving mad and was locked up in his house. The graffiti on the lower wall of the house has not been made with blood (as the folklore sees it) but with menie = orange-red lead oxide or red crayon. 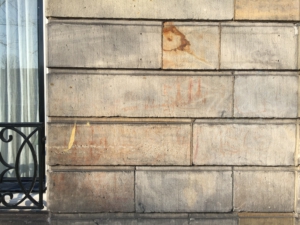 In the last years of his life Van Beuningen wrote letters to the church authorities about the coming End of Time, apocalypse. He also painted Hebrew or Cabbalistic graffiti and ships and oddly spelled names on his house at Amstel 216. Raving mad, he went out in the dark of night, made a noisy racket, scaring the neighbours who did not open their doors to the madman.
Age-old Graffiti on the lower wall, once made by Coenraad van Beuningen mis-spelling his own name, is still there for all to see!
One fine day when the sunlight was at the right angle, and the humidity was just right, I made these fabulous photos.

I can take you on a city walking tour to show more exciting Amsterdam treasures in architecture and applied art. Contact me at kalden@xs4all.nl. 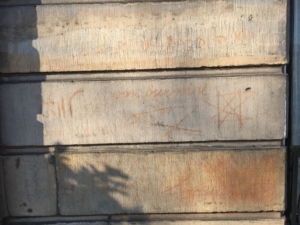 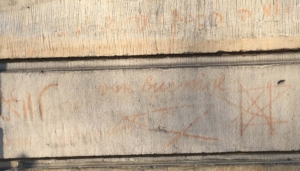 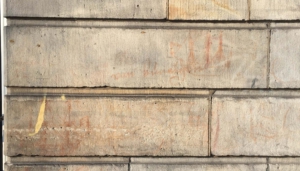