Mondrian – Live Zoom presentations, brought to you from Amsterdam

Mondrian aka Mondriaan has become one of the most influential artists of the 20th Century. 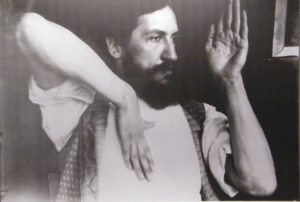 Mondrian in an expressive dance posture.

Presentation 1, Young Mondrian describes how the books of cult leader madame Blavatsky drew him into the sphere of Theosophy. This led to a great series of inspired works of art. The art collector Slijper amassed the worlds largest Mondrian collection in the world and I will explain how all works went in the end to the Kunstmuseum, The Hague (formerly named Gemeentemuseum). In this class I will lead you through his astounding development, and will explain the Tree series and the Pier and Ocean series and how these two led to the final world famous art with stripes and colour fields with pure primary colours. These paintings are NOT abstract but according to Mondrian more real than what you and I see all around us. High-Resolution images. Mondrian left explanations about his work in the art magazine De Stijl, but his own writings are hard to understand. He used his own dark vocabulary. 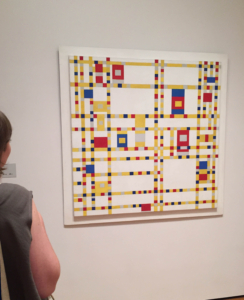 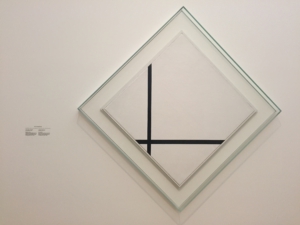 Presentation 2. Mondrian’s adult life, Paris-NYC.  From Paris in the Rue du Depart up to his end in New York City.  I show not only the scale model but also my own colour photographs of the full-size mockups once exhibited of his apartment and art objects in in Rue du Depart, Paris. This allows you to walk around like never before. This apartment was in constant flux, with cardboard patterns on the wall changed as he felt the need.  We look at the adult style with the final world famous art with stripes and colour fields, using only primary colours and stripes. The very last part of the presentation shows two incredible works of art, reflecting New York city life.  Broadway Boogie Boogie now in the Museum of Modern Art, NYC. And Victory Boogie Woogie, now in the Kunstmuseum, The Hague. These two show that Mondrian had new ideas and practices. High-Resolution images.

Full list of all art history presentations is here.

Send me an email: kalden@xs4all.nl 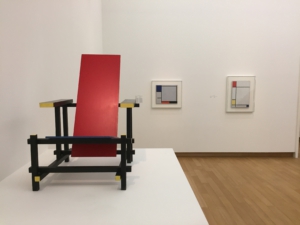 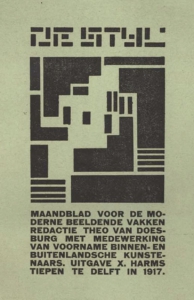