NEW Virtual Visit. Because of the Corona shutdown, I now offer a digital museum visit, using Zoom combined with my image bank. Call me for a live virtual Zoom class visit appointment! Enjoy a private Powerpoint presentation with your own ‘Professore’.

HUGE list of museums for digital visits via my photo files + Zoom.

Birmingham museum (center of the city)

We start with the Birmingham Museum and Art Gallery, opened 1885, in the center of the City. Birmingham is  the second large city in England.  I will focus on the Fine Art section of this museum. The size and scope of this museum reflects the wealth and power of the city’s economy and trade.

History section, a model of what Birmingham market looked like around 1300. 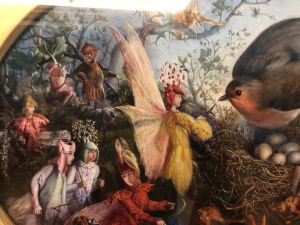 John Anster Fitzgerald, in a dream-like fairytale rendering in two oval paintings: a Cock Robin alive (shown here) and the same bird after the killing.. 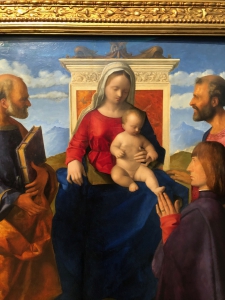 A fine Bellini, Sacred conversations, with Mary, Jesus, Peter, Marc and to the right the donor.

Burne-Jones, unfinished project with scenes of Troy. It gives us great knowledge on the phases of drawing and painting. The style refers to Pompeii.

Burne-Jones, the largest watercolour in the world. Subjest: The star of Bethlehem. Wise Men pay homage to infant Jesus. Ordered 1887 and paid for by the Corporation of Birmingham. 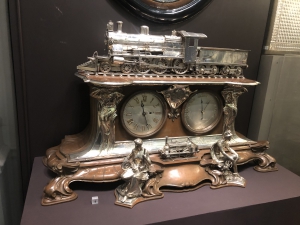 Epitome of Victorian silliness and craft. Is it a clock? Barometer? Train? Lady Industry? Hermes, god of trade? Yes yes, it is everything combined.

An exquisite Carlo Dolci, preparation for the crucifixion of St Andrew, 1643. The quality is a mixture between Dutch golden age and Italian counter-reformation art. Very rare!

Bernard Fleetwood-Walker (born Birmingham, d. 1965). he was a teacher in the local art school. Shown here is the artist’s family at Polperro, c 1935. 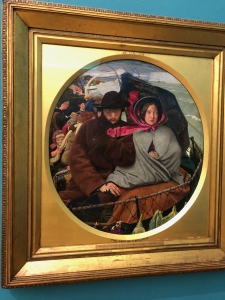 Jan van Hemessen: Christ as a Man of Sorrows. Hemessen was a court painter working in Antwerp and Zeeland. The age of mannerism. The museum labels calls it protestant / exaggerated, missing the point.

Hoard or Roman gold. Staffordshire Hoard. Discovered in the nearby village of Hammerwich in 2009 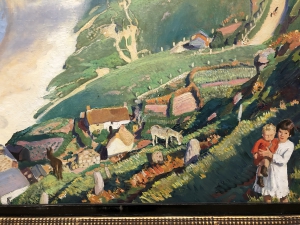 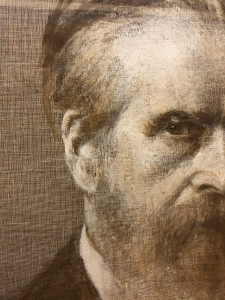 Edward Richard Taylor, headmaster of Birmingham school of Arts and Crafts. A self portrait? Extraordinary technique: oil on hessian. c 1905.

The Round Room including Jacob Epstein’s  The Archangel Lucifer (1944–45).

A dedicated gallery was opened in 2014 to display the Staffordshire Hoard. Discovered in the nearby village of Hammerwich in 2009, it is the largest hoard of Anglo-Saxon gold ever found. Alas 99% has been broken into small bits of very small bits. This makes viewing a bit of a let-down.  Much of the hoard came from a super luxury helmet, broken by plowing over the ages.

This trip can be arranged in a multi day tour including  Liverpool, Manchester, Cambridge. This combination will entail extra hotel nights payable.

Below: Barber institute of Fine Arts in the University district, some 20 minutes away by taxi. 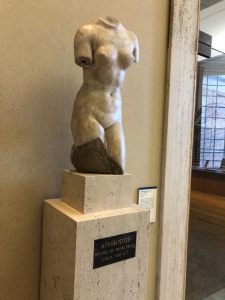 The opening chord of the Barber museum: Workshop of Praxtiteles, Aphrodite! C 330 BCE.

Weird and wonderful to our jaded eyes: Jan Gossaert called Mabuse, Hercules and his wife Deianira. Antwerp? 1517 Wife sits on silver cloak donated by evil centaur Nessus. An evil trick is coming. When Hercules wears the cloak he will be engulfed in fire. 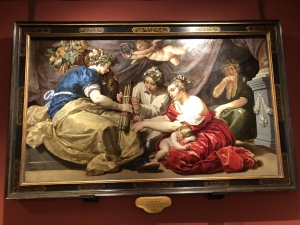 Barber institute: Abraham Janssen, Peace and Plenty binding the Arrows of War. Possibly made to hang over a mantelpiece, and to bee seen from below.

Pierre Puvis de Chavanne, The beheading of John the Baptist. Artist known for his bone dry pigments and bleached colour scheme. Style is archaic and weird. 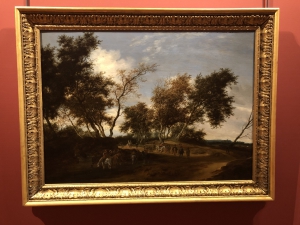 Please note: As your VIP tour guide and art historian, I will fly in from Amsterdam and will stay there (at your cost). Our museum visit can perhaps be extended for a number of days and nights to the excellent art museums of Birmingham, Manchester, Cambridge.

Quality of this tour: The day after my return from the art museums in Middle England, I gave a tour of the Royal Collection of Paintings, Mauritshuis, The Hague.  My client write this review the same day: “Hello Kees! I want to thank you again for our exquisite tour of the Mauritshuis museum today! This might sound cliche, but it was truly a dream come true!!  I could never have imagined having someone of your qualifications leading our private tour! You are such a gift to art lovers!  Thank you again and best wishes!  Virginia Swanson. PS. And, by the way…. your tour was worth 10 times… even 100 times,  the amount we paid!  We’re beyond grateful!  Again , best wishes!”

Drs Kees Kaldenbach, art historian, in front of the Night Watch by Rembrandt.