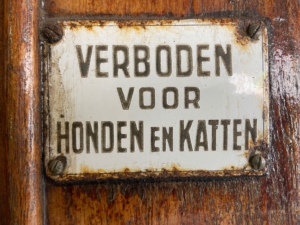 Social engineering can be done in many ways.

In Germany, Switzerland and Austria, in the open air and public sphere, there are strikt rules often enforced with Verboten signs. The background thought is a strict need for rules, security, order. Uncertainty avoidance is the double negative, and thus indicates inner need for certainty.

In Holland / The Netherlands the rules are often not visible overtly enforced, but psychological tricks are used, for instance in country roads with 70-80 Km speed limit, the middle part of the asphalt is grey (for cars) and the  side parts, often 1/4th or 1/5th are reddish brown (for bicycles).  This means that class will slow down automatically as they cannot pass each other without touching the brick-red part.

Exceptionally, The No Dogs-Cats sign was result of a 1920s-1950s hygiene law keeping pets out of butcher shops. Since the hippie days of  the 1960s many shopkeepers ignore this law. This is called “gedogen” or “to tolerate”. We are a freedom loving folk and rules and authority are widely frowned at. Nobody tells us what to do!

The downside negative results are seen in the numbers of Corona virus spreading in 2020 and 2021. Fairly high in Holland, fairly low in Germany. 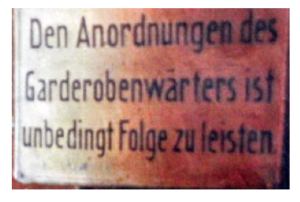 Den Anordnungen des Garderobenwarters ist unbedingt Folge zu leisten. The directives of the cloakroom staff is to be strictly obeyed. 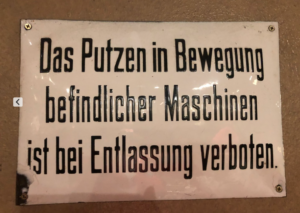 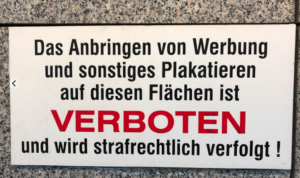 Berlin: Posting advertisements and posters in these areas is Verboten and will be prosecuted by law. 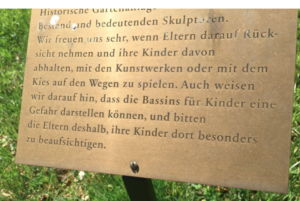 Swiss museum garden, Winterthur. Parents must see to it that children do not touch works of art and do not play with gravel on the pathways.