+ the New Church on Dam Square.

+ Our Lord in the Attic, a hidden Roman Catholic church. 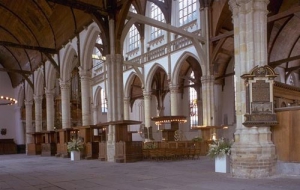 Old Church, Amsterdam, the nave. These days it is used an an exhibition hall as well.

Amsterdam grew from the nucleus of  the initial fishing and trade town – into a world trading harbour after the 14th and 15th C. Inside the Old Church you will discover great monuments to heroes highlighting proud chapters in Dutch history. The whole edifice is designed and built in fascinating gothic architecture. The blue-grey natural stone slabs you will walk on, the grave markers on the floor, speak of wealthy inhabitants and the key role of the Christian faith. Burials inside churches were outlawed and thus discontinued in the Napoleonic times. The small thus was dimished.

The Old Church is situated in the Red Light District, which is – by the way – completely safe to visit because of CCTV cameras and policing. Architecturally it is classified as a “Hallenkerk” with equal roof height in all lengthwise elements. 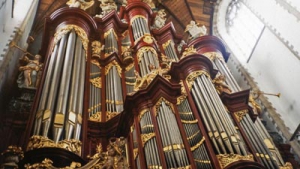 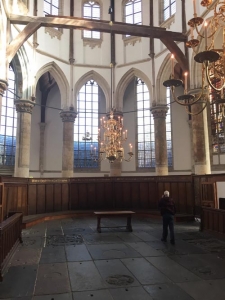 Old Church, view toward sthe spot of the former altar. 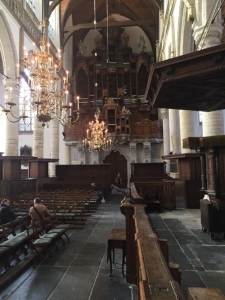 Old Church, view towards the organ. The organ pipes temporarily removed for renovation.

For side-by side comparison a visit to both Old and New church will be enlightening. The New Church (Nieuwe Kerk) was built next to the Town Hall, a building later known as Royal Palace, on Dam Square. Initially the gothic church was planned to have a high tower, but the City Council wished not to be outdone in height and forbade it.

Both churches are Gothic in style, but have marked structural and design differences in conception, ornaments and monuments. They can be visited, normally with an entrance fee – or with your annual MuseumKaart pass. 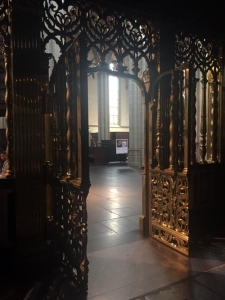 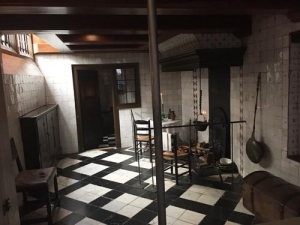 Our Lord in the Attic hidden church. The one and only seventeenth-century home kitchen still extant. The marble floor is a silly example of over-restoration. 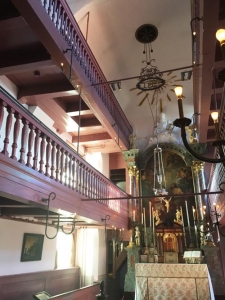 Our Lord in the Attic, a hidden Roman Catholic church with multiple floors. 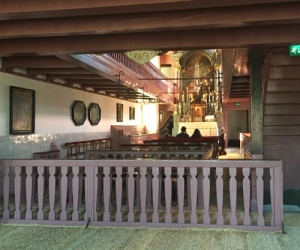 Our Lord in the Attic, a hidden Roman Catholic church. Tolerated by city authorities. The interior has been revamped after careful research.

Both churches now function as exhibition halls. A marked difference with churches abroad are the massive monuments to “Sea heroes”. The Dutch Republic was master of the high seas and international trade. Key admirals ensured that this position was maintained in statecraft and trade. Enemies abounded: English ships, French ships, Spanish or Portugese ships, Mediterranean pirates and privateers. Land-based generals and officers leading armies on foot and horse did not get that famous.