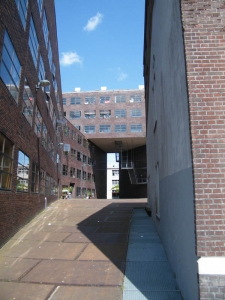 Visit new city planning and modern architecture on a massive scale, on these islands: Kadijk, Java, KNSM, and IJburg

Private architecture tour of the exciting recent architectural developments in the Eastern Docklands of Amsterdam.

Architectural tour – a private tour with an easy ride by taxi, bus, tram or bike – or on foot, exploring the modern urban renewal projects on the former docklands area of Kadijk, Java, KNSM, Sporenburg, Borneo, and the huge IJburg islands, all in Amsterdam, North Holland, Netherlands.

The first project near Central Railway Station  is the Java Island in Amsterdam. We enter it via the Jan Schaeffer bridge. Here, one can study examples of contemporary port area renewal. Great attention is paid to the master plan, started by the City Council, and developed by a master architects / philosophers. From this master plan, a number of independent architects assisted in filling in the grid of the plan according to the given set of rules. Dockworkers and longshoremen were replaced by residents.

Is this a meteorite? I will explain.

KNSM island  was designed with quite another master architect, Jo Coenen, who himself built the crowning edifice at the end of the island,  the circular “Emerald Island” apartment building. Next it is the festive Barcelona building by Bruno Albert and the gloomy Piraeus building by Kolhoff and Rapp, almost resembling an East German Prison. The Skydome building by architect Wiel Arets is situated to the opposite side.

The next really huge man-made island, IJburg, is a tram ride or a taxi ride away and has yet other characteristics. I will carry a portfolio with maps and aerial pictures to explain the structures. 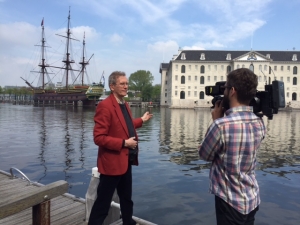 Camera team from USA, May 2017, at Maritime Museum / Scheepvaartmuseum.

Amsterdam architecture shows strong examples of contemporary port area renewal. Great attention is given to the master plan, which were developed by a master architect / philosopher. Then a number of independent architects assist in filling in the grid of the plan according to the given set of rules. 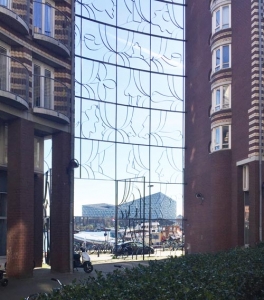 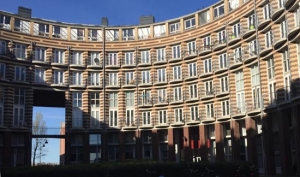 All the way on the West end of the harbour is the interesting Silodam. Here, another public-private partnership ensured a fine place for inhabitants and visitors, including tourists. 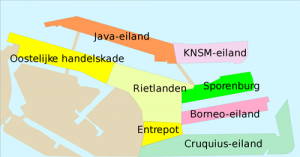