The only commemoration for the ultimate genius in Dutch Science history

On this walking tour we will walk the central city and discover Amsterdam hotspots that connect us with great scientific minds of the past. I believe in outreach, bringing great science history to the people.

We will be able to visit most of the locations listed here:

Blaeu, and other geography map publishing houses, producing the very best atlases and globes of that day and age.

Bartjens, the mathematics teacher whose school textbook was used for many centuries.

The scientific knowledge nerve centers: Arti, the Academy of Science, book publishers, university hubs and the spots where they originated.

The guild hall of the medical surgeons.

Shipbuilding at the shipyards at the wharves, the smell of tar and pitch.

The hidden hallway of the Amsterdam Historic Museum.

Photo on top: a tiled mural of Christiaan Huygens in the Leidsestraat.

A Vermeer painting, Geographer at work.

Globes by the Blaeu firm, at the heart of mapmaking and atlas producers.

Rembrandt: surgeons around the corps of Mr Kind. A class by Dr Tulp. 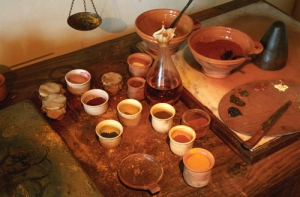 Table filled with earth pigments. These were the staple colours for Rembrandt. Earth colours and chemical products.

Guess what this traffic sign wants you to do.

The science of light refraction through a prism. And the Simultaneous Contrast of Colour. Drawings by Kaldenbach.

Spices and herbs, the oldest store in Amsterdam.

Metsu, Woman reading a letter. A letter is read. The sender may be far, far away.