Leiden Walk in the Old Center

Leiden is one of the best preserved inner cities in the Netherlands. Leiden, our day trip, is now one of the most attractive Dutch cities because of its beautiful fabric of streets, canals, mighty churches, many museums, a superb hill fortress and an important university.
When this nation started a revolution and became independent from the Habsburg government and the king of Spain in the 1570s, there was a pressing need for key officials: protestant church ministers and also lawyers to set up a system of new laws for the newly formed country. Leiden became the nation’s  eat of the first Dutch university and has retained this elevated position. Alongside Rapenburg canal a series of mansions formed the center of learning and study. Locally, great scientists made progress in natural sciences, medicine and other fields of knowledge. A number of great publishers and booksellers were here as well and some still exist!

Those interested in the history of the Pilgrim fathers:Around the Rapenburg and Pieterskerk, the biggest church, there are various monuments and historic markers.

Not to be missed is the Leiden Hill-fortress. We find the almost secret and hard to spot entrance by the bridge at the fish market. 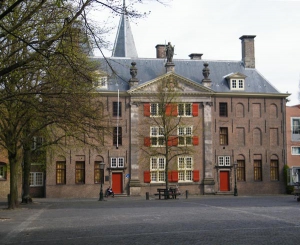 Hall of the Counts (Gravensteen), Leiden.

This image shows the court house situated at the former area of the Hall of the Count (Gravensteen), notably Floris the 5th. One of the fascinating stories in Leiden is how the power of the local count diminished around 1300 – 1400 and the power of the local city government grew stronger.
Back in 1568, the newly founded Protestant state (the Republic of 7 united provinces, The Netherlands) urgently needed a group of intelligent people, well trained in religion and law, and therefore a place to educate these preachers and lawyers. Leiden University was the very first to be founded in this country and since those days it has remained a major focus of learning and a center of excellence. The Rapenburg canal is now lined with a number of the institutions of the university such as the Great Hall, university institutions and the Hortus Botanicus, or botanical gardens. 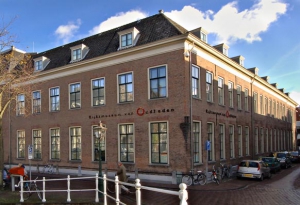 Another major building at Rapenburg Canal houses the RMO Archaeology and Antiquity Museum in which you may explore such diverse objects as stone axes. Two spectacular ones, recently acquired, are ceremonial bronze hand swords crafted for priests or druids. These belong to the absolute world top.

A prize pocession is a Dutch fishing net from the time of the early Pharaohs. Its Egyptian collection contains the full size temple of Taffeh, donated by the state of Egypt, and good number of mummies, enormous natural stone sarcophagus and various grave objects. Thus the Egyptian collection is arguably considered the fourth or fifth most important collection in the world (after Cairo, Metropolitan NYC, Louvre, Turin, Brooklyn, and I have visited them all over the years).

Among the many other museums well worth visiting are the Ethnology museum, displaying faraway cultures in an attractive way.

We will have to wait for the reopening of the Fine arts museum called Lakenhal, which exhibits paintings by Rembrandt, Dou and other masters in Leiden Fine Painting (Closed until summer 2018).

I will also take you to the secluded street and alley where the Pilgrim Fathers lived before they sailed west to America. There are a number of sites with plaques indicating their history.
Near the railway station we find a windmill, which reminds us of the one operated by Rembrands’s father and brother. Across the tracks just outside the center is the huge Naturalis, the National Museum of Natural History.

Elsewhere in Leiden we may visit large churches, small houses, a wonderful central canal and, half hidden, a massive mound of earth on which local inhabitants could flee high waters. Scattered throughout town are the ‘hofjes’ or courtyards for the elderly. 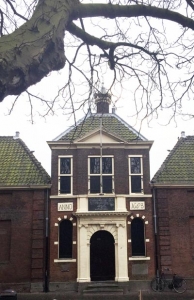 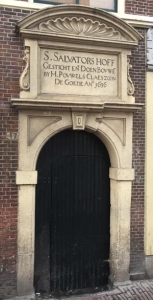 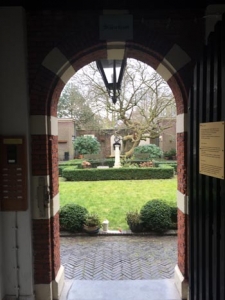 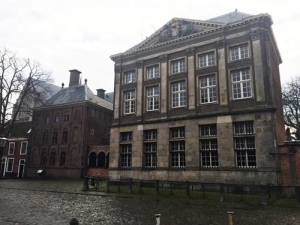 Leiden, Justice court including prison, Gravensteen. The site of the former Count’s castle. 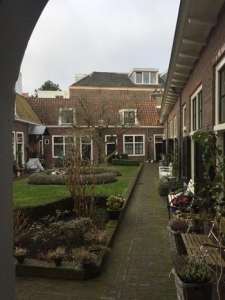 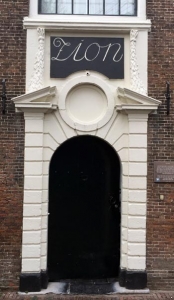 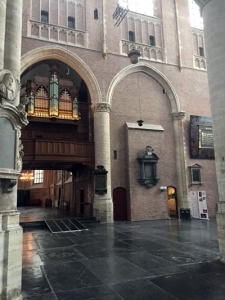 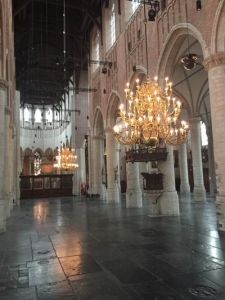 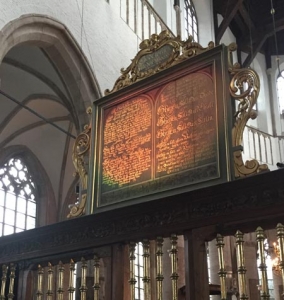 Pieterskerk, the key 10 Commandments are listed. 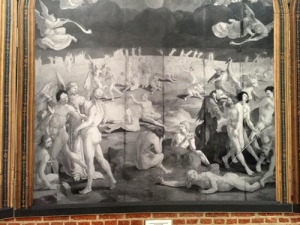 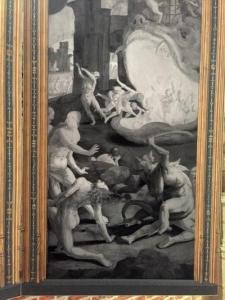 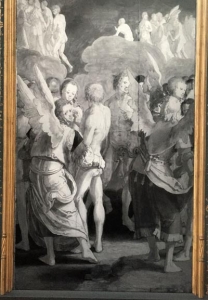 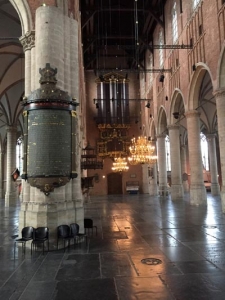 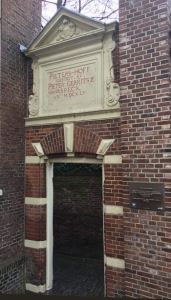 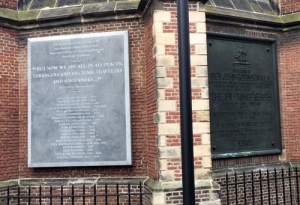 Two commemoration plaques, about the Pilgrim Fathers. A must-see for travelers from the USA. 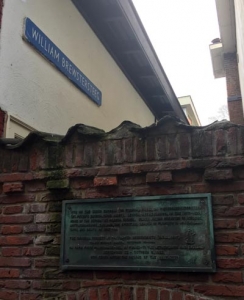 Commemoration plaque, about the Pilgrim Fathers. 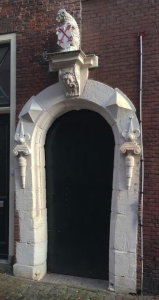 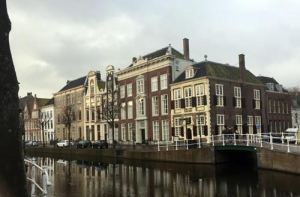 Stately mansions on Rapenburg canal, seat of the University and publishers.

Another Testimonial:
“In the past you have guided me through Leiden (Leyden). My reason was that I was preparing myself to write columns for Leidse Stijl with subjects on the area of culture and art. That was an initiative of NRC and Intermediair newspapers. I thought your guided tour was fantastic. Robin van Doorn” 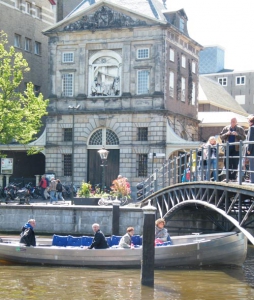 HOW TO GET THERE
Leiden is easy to reach with public transport, by train just a 30 minute ride. I hold a Dutch Railways rebate card. For this train tour I can offer you a special rebate of 40% for three separate adult railway tickets. This makes it economical for you as clients. I can join you from your hotel or from the Amsterdam train station. 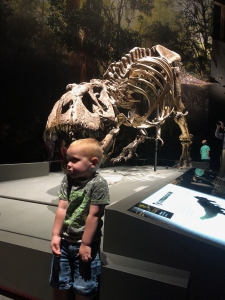 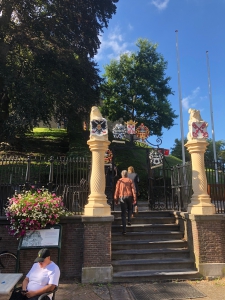 Entrance to the Burcht, a man made mound for fleeing up to safety. Summer view. 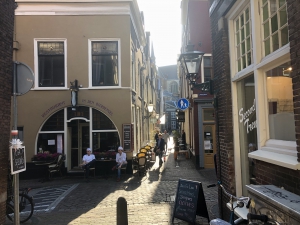 A walk from Breedstraat to Antiquities museum 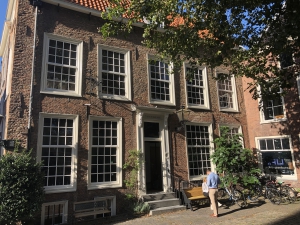 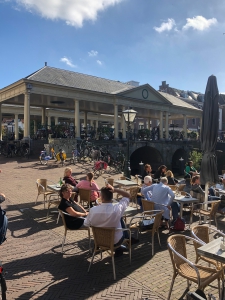 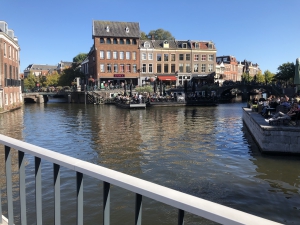 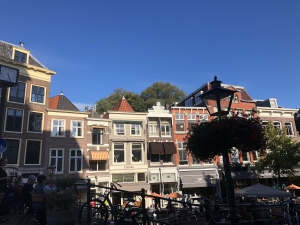 Please explain the ridiculously tall trees behind the houses! 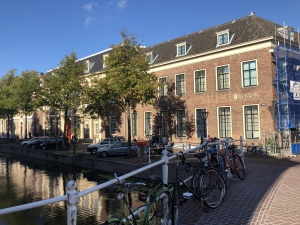