Rotterdam, a City Bombed by Nazis and largely Rebuilt in the 1950s and 1960s

A walk in the historic Center of Rotterdam.

Join me for a visit to a resurrected city: Rotterdam. The inner city of Rotterdam was suddenly bombed and almost completely razed and obliterated by the Nazis in May, 1940, causing the immediate capitulation of the Dutch State.  For the Nazis promised to destroy a series of other historic cities. Afterwards, Rotterdam had to clean up the rubble and re-invent itself.

In 1940, a local civil servant, without having OK from the city council, decided to use the rubble to fill in almost all of the canals and thus was able to re-design the map of central Rotterdam on an almost blank slate. Therefore, in visiting Rotterdam, expect modern architecture and and interesting exemple of city planning on the fly. Especially on Weena and Coolsingel streets, but also in the humongous market hall, the city shows how a blank slate has had some advantages.

On Coolsingel some buildings were spared by chance, and others were built from scratch. A huge sculpture by Naum Gabo, constructivist in style, has been nicknamed “The Thing” by the Rotterdam population. These days a huge fight goes on about who has to pay for its upkeep, as it slowly rusts away. The contenders are  the Department store who gave it – and the City on whose soil it stands.

Across the mighty iconic Erasmus bridge we find New York Hotel (1917) for emigrants, serving as a last place to stay during the days before boarding their huge ocean liner ship, is still a remarkable building in a beautiful Art Deco style, and the current huge restaurant is something to experience. One of the clever options to get back to the inner city  is to reach the other shore in a super fast water taxi, creating a water spray and a speed you have seldom experienced. From the water, within 15 or 20 minutes, we can also tour the highlights of the waterfront.

In the old center, the Boijmans museum is well worth a visit, and the sleek white buildings opposite speak of the architectural sleek idealism of the 1920s.

The city has great architecture from the last 20 years. The ultimate landmark of Rotterdam is the huge swan-like Erasmus bridge, by architect Ben van Berkel. The city was willing to spend much more money than strictly necessary in order to span the space between two sides of the river, and decided to give the world a new iconic image.

The iconic Erasmus bridge, panorama on Wilhelmina Pier, where the cruise ships moor.

Within Rotterdam we may go on foot, by metro or by taxi and water taxi. Tour by Drs Kees Kaldenbach, a professional Art History scholar with excellent teaching skills. Specialist in Fine art and Design, Architecture and History. VIP entry. 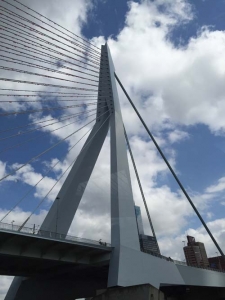 Rotterdam is easy to reach with public transport, about one hour by train from Amsterdam. I hold a Dutch Railways rebate card. For this train tour I can offer you a special rebate of 40% for three separate adult railway tickets. This makes it economical for you as clients. I can join you from your hotel or from Amsterdam train station. 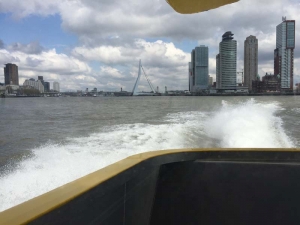 Skyline from the water taxi. 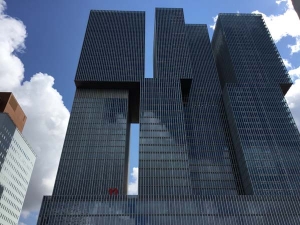 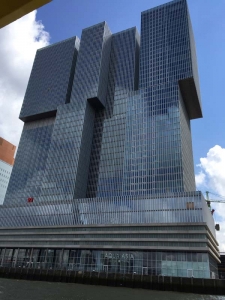 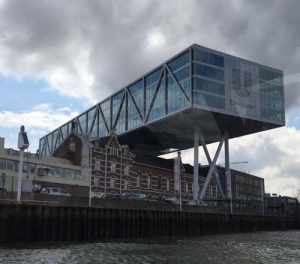 I will explain the way this daring building was built and then slid over the old roof. 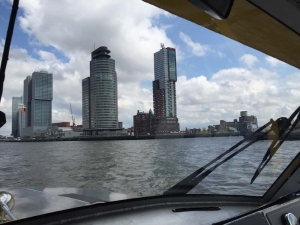 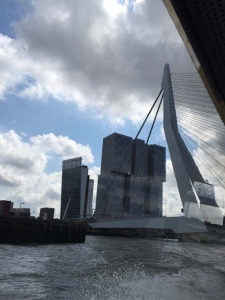 The grand building “Rotterdam” and the Erasmus bridge.