Vermeer View of Delft down to a millimeter

Vermeer, View of Delft. The author published important information on what is actually seen in this Cityscape

In 1660-1661 Vermeer painted his famous View of Delft in which he changed a lot of elements compared to the given Delft reality: The long continuous roof on the left hand side never existed. The bridge in the middle was hooped, not flat and the twin barbican towers of the Rotterdam gate should be positioned much closer towards us, not pushed sidewards as he did. And he did strange things with the tow barge on the left and the other ships. For that article see https://kalden.home.xs4all.nl/verm/ship/Ships_main.html

These are some mind blowing facts concerning Vermeer’s View of Delft; many elements are off but some elements are precise down to a millimeter.

1.Vermeer painted a few innocuous houses behind the city wall to the middle left, with stepped gables.  A few of these houses were still standing in  1983 and architectural historian Wim Weve made an exact drawing based on measurements. Kaldenbach also measured the scene and added the exact figures in millimeters on that published drawing shown here in full and in two details. On his drawing Kaldenbach erroneously added a facade plaque as 1670, whereas it should read 1570.  The second digit was oddly formed and a house painter added too much black paint to the lower left, transforming the second digit 5 into seemingly a 6. City archivist Soutendam still got it right in 1867 when he prepared facts for a publication on city signs by J. van Lennep. But later researchers, including me, read it as 1670, as published in  Artibus et Historiae, nr 6, 1982 (antedated!), page 15 in the paper ‘Vermeer’s View of Delft and his Vision of Reality’ by Arthur K. Wheelock and Kees Kaldenbach.  The full article is here: https://www.academia.edu/9753123/Vermeers_View_of_Delft_and_his_Vision_of_Reality

Why is this measurement important? It shows us the Vermeer got this innocuous very minor, largely unnoted detail of the painting down with an exactitude of millimeters. How is this possible? I still do not know.  Many theories have been put forward. A darkened sit-in-the-box Camera Obscura, a Camera Lucida with lenses and mirrors? Many historians and scientists discard both ideas. I cannot yet picture a credible working method, but the stunning above millimeter facts are there. Some kind of optical device was used in preparation!

2. Vermeer painted the proud tower of the New Church in bright sunlight just right of the center of the view. On this painting the slender part is exactly 25 mm. The whole painting is H 98.5 x W 117.5 cm. Therefore the ratio of tower to the whole is easy to calculate as 1/47.

Towards the left he also included the tip of spire of the Old Church just above the line of the housing. In the Artibus article I erroneously stated that the sunlit New Church tower was two times too high and two times too wide. Now this turns out NOT to be the case. On 12 July 2020 I photographed the same scene  with my iPhone 11, very close to the original stand point where Vermeer made preparatory notes, That iPhone camera records a field of vision close to 52 degrees, thus very close to what the human eye experiences. Standing on the colourful monument right there on the Kolk water I took the photo shown here. With some Photoshop wizardry the two images were superimposed, married into one large image file in correct relative size, the photo above, Vermeer underneath and superimposed hair line measure line were added exactly on the tip of the Old church and on both the right and left hand side of the New Church tower. Again the result was a stunning spot-on with an exactitude of millimeters. How is this possible?

Again some optical device which he used while preparing a drawing. Later on he felt free to change elements of the scene according to his taste.

In the Artibus article, Circles of Confusion are mentioned. These circles only appear in a Camera Obscura (or modern photographic camera) when a direct beam of sunlight hits a shiny metal surface or a wet glistening surface.  In the View of Delft painting such Circles of Confusion are visible on the side of the herring ship on the right hand side. However, the sun is in the wrong position and cannot produce that effect there and then.

The best existing proof of Vermeer using a Camera Obscura is in the out-of-focus parts on the painting The Lacemaker in the Louvre. So Vermeer did use a Camera Obscura in initial stages, but not slavishly. How and exactly where the Camera Obcura was positioned in Delft for preparing the View of Delft is visible on the Projection drawing below. 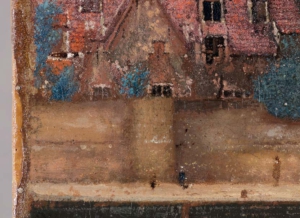 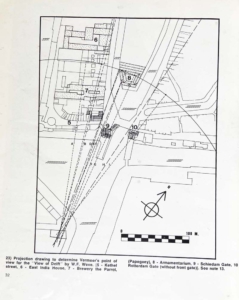 W.F. Weve, projection of viewpoint in Vermeer’s View of Delft, 1983. 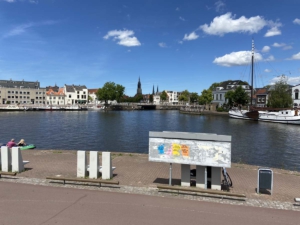 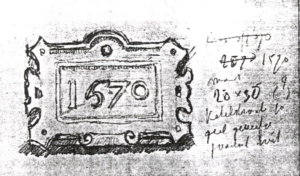 City archivist Soutendam made this sketch of the plaque that Vermeer saw in 1660, Kethelstraat 10 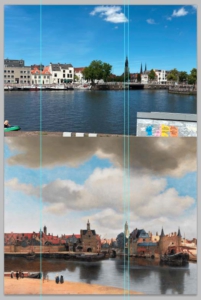 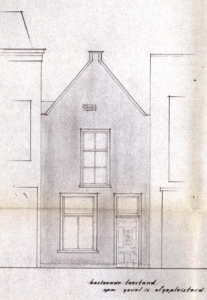 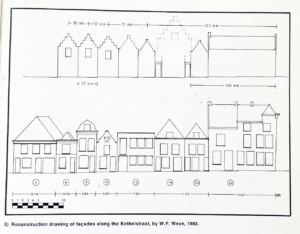 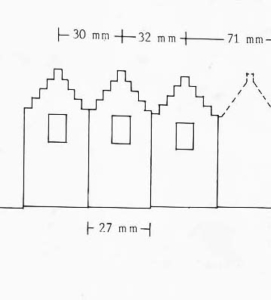 W.F. Weve, measurements, as supplied by Kaldenbach, 1983, including Kethelstraat 10 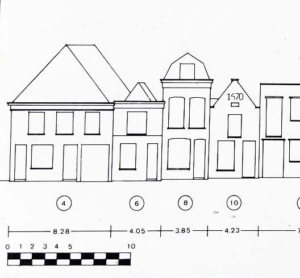