The man known worldwide as Caravaggio (1571-1610) is considered the world’s most influential painter. He produced his best and most controversial works in Rome between c 1594 and 1605.

Powerpoint presentation 1 covers his early career. Born in Milano (not in the village of Caravaggio) on Sept 29, 1571. Sadly, he was orphaned early in life. He studied in Milano with several painting teachers and was protected by the nobility of his birth region. His outstanding specialisation was flower still life painting. Those exquisite flowers he often combined in scenes with pretty young gay boys, most luxuriantly homoerotic works. Moving to Rome when he was 19, hooking up in Rome with his wealthy patron Cardinal Del Monte he included young boys in his paintings, but widened his artistic scope and output to religious subjects.
Notably in everyday social life he was an aggressive, competitive young man, sporting a sword during his walks through Rome, and picking fights where he could. Contacts with male gay boys and female prostitutes are reflected in many paintings.

Generally he is now considered as having been bi-sexual with – in his paintings – a preference for scantily clad soft-skin boys around the age of 15. Please note: in this Powerpoint presentation this part of his wild lifestyle will be approached with European candour. This may be seen as difficult for people with sensibilities or perhaps puritanical tendencies in the USA. 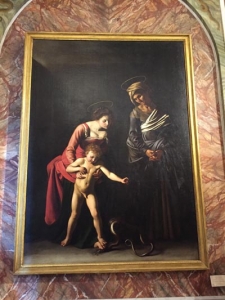 Refused by the Palafrenieri staff in St Peters basilica, due to lack of ‘decorum’

He led a life full of ambition, prowess, competition and also had his enemies in the local art scene. Caravaggio’s main biographers were Mancini, Baglione and Bellori. They critisised his bad ‘ínvenzione’ his bad ‘disegno’ his shocking lack of ‘decorum’ and general failings in ‘arte’. Be that as it may, he became a fountain of inspiration to a worldwide group of artists. Some of his works, like the Palafrenieri Madonna were refused and ended up in great private collections such as the Borghese. 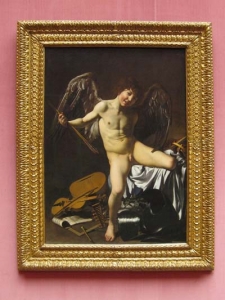 Berlin: the laughing Cupid in Amor Vincit Omnia was “Cecco… his owne boy or servant that laid with him.”

In 1650, while visiting the Giustiniani collection, the English tourist Richard Symonds heard that the model for the Berlin masterpiece  Amor Vincit Omnia was “Cecco… his owne boy or servant that laid with him”.

In making these Powerpoints Drs. Kaldenbach has used the very best sharp Hi-Res visual material available, a result of 40 years of travel. In Detroit, teaching about Mary Magdalen.

Powerpoint presentation 2.  Middle and Later life. The high point of the presentation is the group in the Francesi church, Three big paintings: Calling St. Matthew; Inspiration St. Matthew; Martyrdom St. Matthew. These were so in-your-face, it drew gasps from visitors from all over the world.  Then we progress to the Popolo church with the story of St.Peter’s Conversion in the road to Damascus + Crucifixion St Peter. Next we will discuss how students at a dining hall in Dublin threw wet pieces of bread on a great Caravaggio painting. Next we will discuss the work made in Malta where he fled after he killed another man. There he also seemed to have laid hands on young Knights-in-training. And he was assisted to escape to Italy without being killed himself. His final year was in Sicily and then Naples. He died in Porte Ercole, from sepsis (blood poisoning), not on the beach but in the local hospital.

Finally we discuss his influence notably on Caravaggist painters from Utrecht, The Netherlands.

Feedback, 31 July 2020, from Carnegie museums of Pittsburgh after my class on Van Gogh: “The class was a great success, and we would love to work on scheduling another class with you featuring Vermeer and Rembrant.”.  Feedback 25 August 2020: “You are our most popular presenter and we will book you for many more presentations.”

Feedback August 2020 from Providence Art Club, with a rich history of 140 years of lectures: “Your class was extremely well received, we will make more bookings this year.”

Feedback, August 2020 from the Arts society Sebarts .org in Sebastopol, California. “We loved your Zoom classes and will book more!”.

Feedback December, 2020: “Hello Jeannette, Today’s webinar was absolutely wonderful.. content, delivery. I learned a lot and thoroughly enjoyed the hour.. When the professor asked if he could go longer, I was inwardly yelling. “Yes, please!!! “This professor is wonderful..a natural teacher and obviously an expert on Van Gogh and the time. Makes me yearn for my college days. I truly hope you will keep me in mind for future presentations like this.”