Claus Sluter, a fabulous sculptor right at the beginning of Northern fine art

Important works of sculpture are now shown in Le musée des Monuments français, in the Trocadero palace which from a high platform overlooks the Seine near the Eiffel Tower.

Visiting this museum shows you NOT the originals but only full scale plaster casts and one visit of two hours saves you many weeks or months of travel throughout France. All plaster casts have been made with great care as professional as possible.

For the importance of Claus Sluter see my main page on the purchase of a Calvary / Crucifix.

1. The large Moses Well (Puits de Moise) now in the grounds of a Charterhouse hospital (Chartreuse de Champmol), now rain proof enclosed in a circular stone structure, with glass panes, and thus visible to the public from the outside. This work is firmly known to be made by Claus Sluter, with archival proof of payment. It was both a well and probably in the middle of the well this pedestal. One may state it is a key work in Western art history.

Visible today is only the base (sockle / pedestal).  On top of the pedestal was a Calvary which is defined as a crucifix holding Jesus with standing at the side his mother Mary and John.

On the sides of the pedestal are these six life-size figures: Moses, David, Jeremiah, Zachary, Daniel, Isiah, all Old Testament characters who have announced the future Passion of Jesus Christ.

The angels placed above the work of Sluter are by his assistant Claus de Werve.

A restoration of the original sculpture carried out between 1999 and 2003 has shown remains of polychromy (coloration) which originates from 1402-1404.

Once it  had a large crucifix on top, holding the body of Jesus Christ. Whether it also had the two figures of Mary and John at the base of the cross as well is a matter of conjecture. 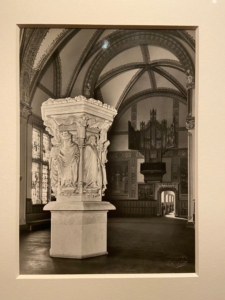 From 1927 and up to 1940, a life-size plaster cast of this pedestal with sculptures around was placed in the upstairs central front hall of the Rijksmuseum Amsterdam, opposite the Rembrandt Night Watch at the other far end of the central Gallery of Honour, forming the alpha and omega of Dutch art. This cast was later removed, for only original works of art were deemed admissible in the collection.

You can still see another cast in Le musée des Monuments français. 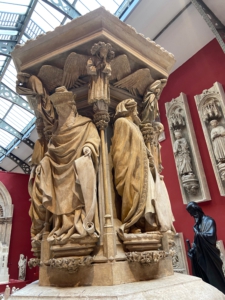 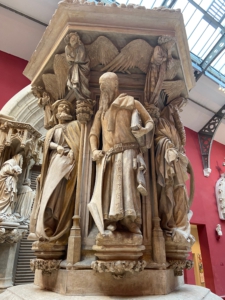 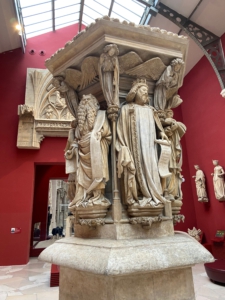 2.Two extravagant over lifesize funerary monuments now shown in the museum of Dijon, Musйe des Beaux-Arts. These were seriously attacked over the ages, especially during the French Revolution of 1798 – but the series of Mourners or Pleurants wrapped around the base have been saves -are still mostly there and a number of the Mourners are firmly ascribed to Sluter. The dormant large figures on top of the monuments are later and quite imperfect recreations based on drawings and prints. See the complete series in Le musée des Monuments français 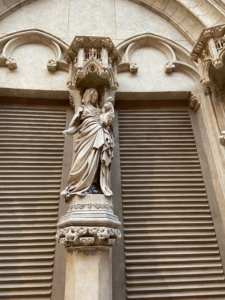 3. Started by architect and master mason Drouet de Dammartin: The church entrance sculptures in Champmol, just outside Dijon, with lifesize images of Philip the Bold and his wife. Initiated by Jean de Marville and finished by Claus Sluter.

To the left hand side: Patron saint St John the Baptist and a kneeling Philip the Bold (1342-1404)

To the right: kneeling Marguerite of Flanders (1350-1405) and her patron saint St Catherine of Alexandia. Initiated by Jean de Marville and finished by Claus Sluter. 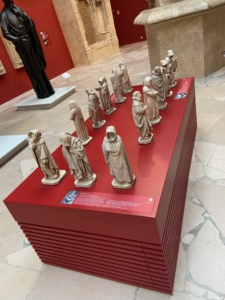 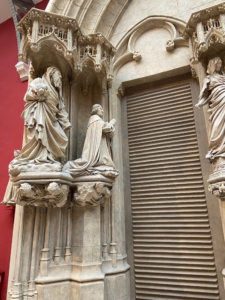 Philip the Bold with his Patron Saint 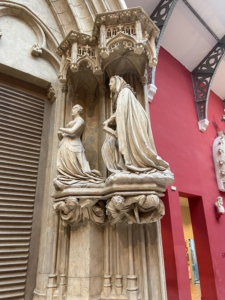 Marguerite of Flanders with her Patron Saint

4. Colouring these statutes was the task of the Burgundian court painter Jean Malouel (= Jan Maelwael, the “good painter”), born in Nijmegen, Netherlands near the border of Germany. Some of the paint he applied is still visible on the sculptures mentioned above. His most impressive remaining work, a circular Pieta painting was once hanging on the Charterhouse wall, is now exhibited in the Louvre. He advised the Duke to hire the Limburg brothers, creators later on of the Tres Riche Heures prayer books for the Duke of Berry. 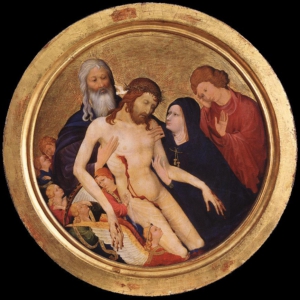 The plaster cast of the Moses Well is now in the Musee des Monuments Francais and was made by Jules Fontaine and entered the collection in 1880.

The plaster cast of the Charterhouse portal entrance is now also in the Musee des Monuments Francais and was made by Jean Pouzadoux and entered the collection in 1885. Digital corrections to the plaster cast date from 2005, by Merindol. 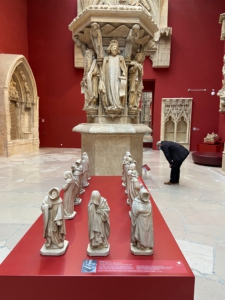 Foreground: Mourners. In back the huge Moses Well pedestal.