Vermeer Amsterdam 2023 once in a lifetime 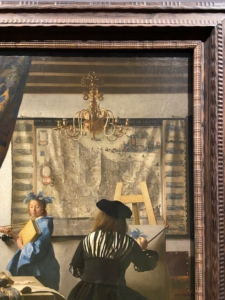 In 2023, from February 10 – June 4,  you may witness a Once in a Lifetime gathering of Vermeer Paintings in the Amsterdam Rijksmuseum.

An At Home presentation by Drs Kees Kaldenbach, art historian, will give you an in-depth perspective.

The Rijksmuseum (Amsterdam)  has announced that  it will stage the largest Vermeer exhibition ever in collaboration with the Mauritshuis (The Hague).

Until now, the most ambitious Vermeer exhibition was the 1995/1996 exhibit with 23 paintings exhibited in The Hague (21 in Washington, when the government institutions lockdown made viewing hard to impossible).

Taco Dibbits, the Rijksmuseum’s general director, expects to amass 24 pictures by Vermeer—and hopefully a few more. Twenty-four paintings would already account for more than 2/3 of the artist’s surviving output. 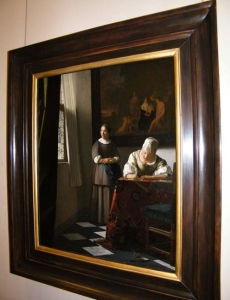 Vermeer, one of his late paintings.

Due to the fragility of Vermeer’s canvases coupled with the growing competition among museums for loans, Dibbits believes that a show, which on this scale is likely not to happen again, will provide a new generation of researchers and public a unique chance to study many of Vermeer’s major works side by side. For this exhibition, the Rijksmuseum is working closely with the Mauritshuis with a team of curators, restorers and natural scientists to examine in depth the seven paintings by Vermeer in Dutch possession. Works by Vermeer from other collections are also involved in this project. 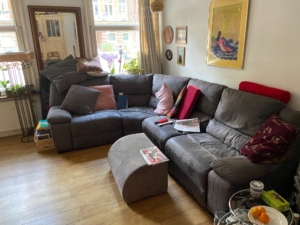 In addition to the works owned by the two museums, which include  The Milkmaid  and  Woman in Blue Reading a Letter, other confirmed major loans to the show include  The Girl with a Pearl Earring  (from Mauritshuis),  The Geographer (Staedel Museum, Frankfurt), Lady Writing a Letter with her Maid (National Gallery of Ireland),  Woman Holding a Balance  (National Gallery of Art, Washington D.C.), and  Girl Reading a Letter at an Open Window  (Gemaeldegalerie Alte Meister, Dresden).

The dedicated exhibition hall for February to the beginning of June 2023 will be VERY crowded and generally Vermeer paintings are rather small. Guiding there and then will be restricted so lecturing there will be less than optimal. However I can offer you a great university level alternative :

In my lifetime, I have seen and studied ALL Vermeer paintings in the world. Furthermore am a Vermeer professional, having built one of the best Vermeer web sites in the world, and during those months I offer you my unique At Home class either before or after your Rijksmuseum visit. Click on this link to this dedicated page.

Drs Kees Kaldenbach is an art historian having dedicated his professional life to Vermeer. He appeared in countless TV documentaries including BBC and Japanese TV and he is member of the Amsterdam Early Modernity / Golden Age circle of professionals.  He is the author of a yet unpublished book on Vermeer. He has been lecturing and guiding in museums both in Holland and International since 22 years. 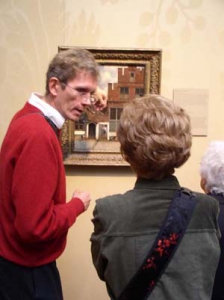 The Little Street in the Rijksmuseum. Photo shows me teaching there.

Business card. The logo has been crafted by Vermeer.